I agree More information
KENSINGTON International / News / The KENSINGTON-Way – The licence to success!

The KENSINGTON-Way – The licence to success!

OnLocation met Shujat Sarwar, Head of Franchise of the KENSINGTON Group, for an exclusive interview.

OnLocation: Shujat. You are the Head of Franchise at KENSINGTON International since mid-2020. What exactly is your job?
Shujat Sarwar: I am primarily responsible for the expansion of KENSINGTON as well as for the support of the franchisees, of course always coupled with the further development of the brand and the KENSINGTON system.

OL: KENSINGTON is a Swiss company with Spanish roots, right?
SS: Yes, it’s a very extraordinary success story. KENSINGTON was founded over 20 years ago as a boutique agency in Mallorca with a very high reputation in the real estate industry in Mallorca. Then in 2009, this real estate company was acquired by Mehrdad Bonakdar and has been continuously developed.

OL: Today KENSINGTON has 51 offices in 4 countries and is one of the market leaders.
SS: Yes, that’s right. Within 5 years KENSINGTON grew from one office to 11 locations in Mallorca and also opened an office in Ibiza in 2018 and is one of the market leaders. Since 2011, KENSINGTON has been growing with a successful franchise model. Today, KENSINGTON is present in Germany, Switzerland and the Balearic Islands with 60 granted licences and will soon open its first locations on the Spanish mainland and in Austria. 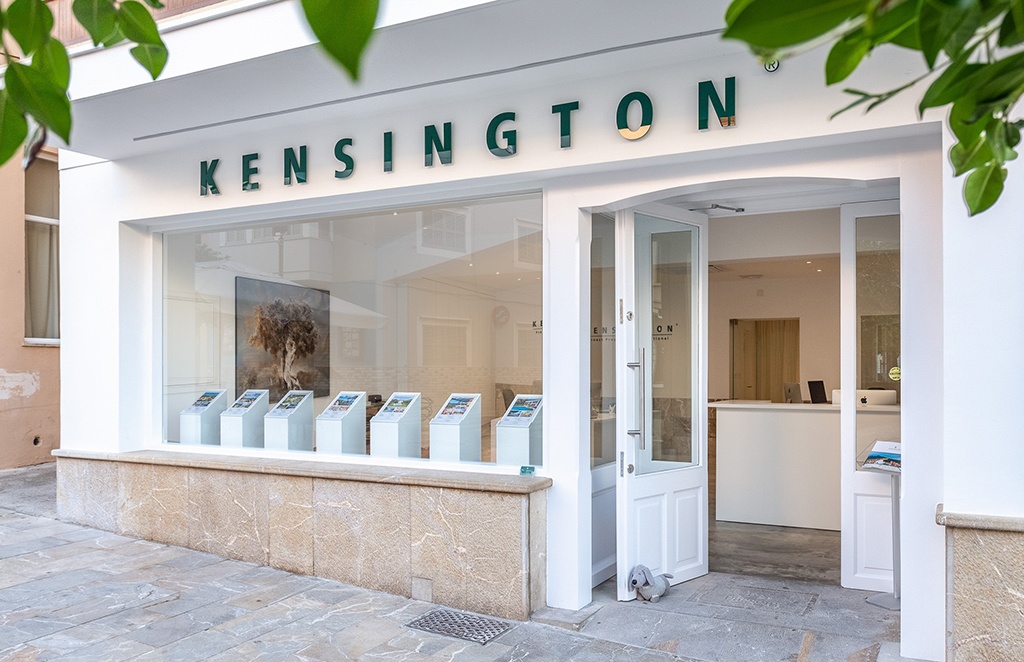 KENSINGTON is now already represented with 51 offices in 4 countries.

OL: How has KENSINGTON experienced the year 2020?
SS: Compared to 2019, KENSINGTON recorded an increase of 20% in transaction volume. The increase in total commission was 18 % and in the number of sold units even 29 %. On the Balearic Islands, there was a decrease in sales due to travel restrictions, as almost all buyers are from abroad. Nevertheless, measured against the big challenges and the circumstances, we can also be satisfied on on the Balearic Islands.

OL: So Covid had no impact on KENSINGON’s business?
SS: It sounds paradoxical. The awareness that the purchase of real estates is always a safe investment shows itself precisely in such phases Alone in the sector of commercial real estates, with a focus on apartment buildings, we are currently experiencing a real boom and can hardly satisfy the demand in Germany and Switzerland. The same applies to investors on Mallorca. We have never sold so many building plots in the first 2 months of a year as we did in 2021.

OL: KENSINGTON is also represented on the Spanish mainland since the end of 2020. What exactly are your goals in Spain?

OL: Who are your franchisees?
SS: Basically, real estate agents, who have decided to go independent and want a strong partner by their side join our brand. Experience shows that in the end it is the big brands that are among the market leaders in Europe. And especially in this day and age, it makes no or very little sense, to walk a path alone when you are much stronger together.

OL: What added value does KENSINGTON offer a new franchisee?
SS: First and foremost, it’s the license to succeed. That’s what a franchisee gets. He becomes part of a network that consists of many successful franchisees. He finds a proven and successful business concept that has stood the test of time and is being developed on a daily basis. Something you can’t do alone with this dynamic. Great importance is also accorded to training and further education in the in-house academy. The synergies, the spirit, the concentrated know-how and renowned trainers and coaches offer enormous added value. And you can see it in my own decision And you can see it in my own decision. I have also decided to follow the KENSINGTON way as I want to be part of this success story.

OL: And the technical support?
SS: Here, too, KENSINGTON is one of the most innovative real estate companies. Whether it’s video viewings or virtual property inspections for prospective buyers who live farther away, or one of the best brokerage softwares in Europe, various apps, a lifestyle magazine as a print and online version, etc., we’ve got it all. As we speak today, the next innovations are already on their way. Joint events such as the annual KENSINGTON Polo Trophy contribute greatly to awareness.

KENSINGTON markets the most beautiful properties in the Germany, Austria, Switzerland as well as in Spain.

OL: The KENSINGTON Group consists of other divisions. To what extent can a franchisee also benefit from this?
SS: Yes, indeed. KENSINGTON Art, the group’s art division, to name just one example, is of course an ideal complement to the beautiful properties that KENSINGTON sells. There have already been the first joint vernissages in 2020, organized together with the KENSINGTON franchisees for their customers.

OL: A KENSINGTON Limited Edition watch was recently launched in cooperation with the luxury watch manufacturer Maurice de Mauriac from Zurich. Is KENSINGTON also planning its own watch division?
SS: KENSINGTON is so innovative and creative that nothing should be ruled out. After all, I work very closely with Mehrdad Bonakdar, the founder of the KENSINGTON Group. I have rarely seen a person so bursting with energy and creativity. Whether it’s a KENSINGTON watch, a KENSINGTON Polo Trophy or other innovations and ideas. It’s always about making KENSINGTON an experience.

OL: How much capital does a franchisee need in order to build up a successful business at KENSINGTON?
SS: You can’t give a blanket answer to that. It depends very much on “where” the prospective customer comes from. Did he already have a real estate office and just wants to rebrand? Is he a successful broker in another company and wants to take the next step and build his own business? In both of these cases, our experience has been that these franchisees get into earning relatively quickly and herewith no high capital is required. Is he / she a career changer? Someone who wants to build up the business “from scratch”? This candidate will probably need a little time to make the first sales. In other words: KENSINGTON is not an “off the shelf” concept, each case is a tailor-made model for us. It very rarely fails because of money. There are always solutions for that. It is much more important that we are convinced of the candidate, that the candidate understands the KENSINGTON way and that he is eager to become part of our success story.

OL: Thank you for the interview.

Then we look forward to yourContact
Back to overview
We are internationally represented for you!
Find your local branch