The KENSINGTON Group was celebrating its 20th anniversary the past year.

On this occasion, Mehrdad Bonakdar, CEO & Founder of KENSINGTON Finest Properties International AG, provides exclusive insights into his personal success story, his view on being wealthy and his “recipe” for happiness in the “On Location” lifestyle magazine.

Mr Bonakdar. What is success?
Oh, you’re going in full steam ahead, aren’t you? (laughs)

Would you prefer if we kept this question for the end?
No, that’s fine. But I can’t give you a legitimate answer about the general meaning of success anyway.

Why not?
Well, because there can’t be such a thing as a generic definition for it. How would I know what success means to you, for instance? Let’s agree on the following: Success means reaching one’s goals. However, I’d argue that very few people truly define their goals and check whether or not they’ve achieved them. And that’s why very few people know how successful they really are.

Are YOU successful?
I’ve got a great wife I’ve been with for over 30 years, two healthy sons I’ve always spent a lot of time with, and I’m in good health. That’s already a lot more than what other people have. That’s already a huge success to me.

That sounds very modest considering what you’ve done with a company that consisted of just 3 employees when you took over.
Yes, that’s certainly something to be proud of. We’re celebrating our 20th anniversary as part of the KENSINGTON Polo Trophy this year and a lot has happened under my direction over the past 9 years. But it’s still not easy to answer the “What is success” question.

How do you recognise successful people?
Unfortunately we always judge the book by its cover first: what people wear, which watch they own, what car they drive… and then we reach superficial conclusions. We always associate success too much with the material side of things. But why would a successful person have to be wealthy? After all, a former heroin addict like Andreas Niedrig, who’s now clean and among the best German Ironman contestants, is also successful, even though he may not be wearing a Rolex. At the end of the day, it’s a person’s aura that matters to me: their charisma, the energy I feel when I meet them. That’s what wealth means to me. That’s what counts. I honestly don’t care about a person’s fortune in that moment.

Do you feel pressure to succeed?
I don’t feel pressure to succeed, but I do feel peer pressure. Who doesn’t? A good friend from England once told me: “The loneliest job in the world is to own a company!” We entrepreneurs like to share our success but tend to be left to our own devices when something goes wrong. Ironically, that seems to be the price you have to pay for your success. What’s key for me is the way in which we deal with external needs and expectations, but especially with our internal ones. We shouldn’t lead someone else’s life just to please others and fulfil their expectations. That’s a mistake almost everybody makes at some point and I think that’s also a matter of personal development: “Looking outwards means dreaming. Looking inwards means waking up.” It takes a lot of life experience and you have to invest a lot in your personal development to come to this realisation. I very much prefer to work on looking inwards. That tremendously helpful. But I’ve still got a long way to go to get there. (laughs)

And how do you achieve that?
As so often, it’s all about the right mix: exercise, fresh air, enjoying nature, not just looking for the meaning of life in business, a great family – and last but not least: love. It also takes a lot of hard work on yourself, especially meditation. I firmly believe that we humans have great power to strongly influence our own minds: “Our mind is like the ocean and our thoughts are like the waves.“ Just like sailing on a ship in rough waters isn’t easy, reaching your goals with a restless mind isn’t easy either. Changing your ways takes a lot of hard work and is a lifelong process. But in contrast to the ocean, whose waves we have not yet the power to influence with our thoughts, we do have the power to influence our mind. And we shouldn’t leave a stone unturned to do so.

But wouldn’t it be much easier to lower our expectations in order to live a more relaxed life?
Great idea! I notice in myself that the older I get, the less I expect. That works quite well. But that’s not an easy thing to do either, believe me. 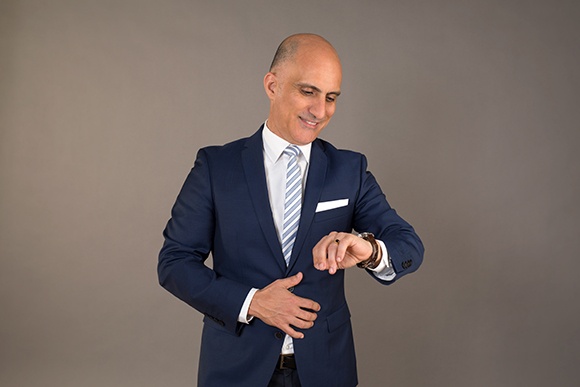 Money makes a lot of things easier, doesn’t it? What’s the formula for financial success?
In my opinion, ambition is a key factor. You either have it or you don’t. It’s nothing you can learn. At school, I had no ambition to achieve good grades in subjects I didn’t like, for instance. And there were quite a few of them. (laughs) But it was my ambition to excel in sports. And against all odds, I almost always managed. I was by far the shortest player in our high school volleyball group, for instance. I was just about tall enough to reach the bottom of the net. And that’s not necessarily ideal for blocking and smashing. Several months before the final exam, I started practising my jumping skills with lead weights attached to my legs. I would sometimes squat down and jump up for hours, down and up. And in the end, I passed with flying colours. The same applies to business. I used to have a manager in a previous job who lacked ambition and wasn’t honest. He was educated, charming, very nice, and fun to spend time with. But he was totally unsuitable for business. He lacked ambition and therefore the necessary discipline to take the next financial step. And that’s why he regularly failed to reach his goals. You can have a lot of experience and learn a lot. But ultimately, your own ambition is often the crucial factor on the road to success. You can’t push your limits unless you know them. But that also means you have to be honest with yourself.

Does money make people happy?
That’s a trick question which always makes me chuckle. Having money alone doesn’t make you happy, but neither does not having money. But in any case, money gives you freedom if you use it sensibly.

And does money spoil people’s personality?
That’s also a cliché. I believe that money doesn’t spoil one’s personality but brings out a person’s true colours. It’s the way in which we handle money and the power associated with it that counts.

What motivates you?
When I was a child, we never had a lot of money. Even back then, I was already keen on becoming rich without even knowing what that really meant. But this has always pushed me to have enough money to fulfil my dreams. It was the first stage of my career, so to speak. But in the long run, money can’t be your only motivator. At some point, your priorities change.

And what drives you now?
First of all, my children do. Watching them grow up gives me a lot of vital energy. Professionally, I’m driven by making other people successful. I thoroughly enjoy doing that. Seeing my franchisees thrive makes me happy, for instance.

You’ve turned a small company with three employees into a “global player”. Were there any moments when you just wanted to throw in the towel?
First of all, thanks for describing us as a “global player”. That sounds great. No, I never wanted to throw in the towel. That’s just not in my DNA. But of course there were certain moments – especially at the beginning – when I was working 16-hours in day-to-day business, when I wondered whether what I was doing really made sense. Incidentally, I had just come out of a sabbatical of almost three years. Apparently, the meaning of life is living an increasingly meaningful life.

Looking back at your success story and seeing how a small business has turned into a whole group of companies, is there anything that still excites you?
It just excites me to create things. To try out new things. I’m a curious person. And I always keep in mind the main agenda: growing the brand. Let me give you an example: Property in the most beautiful places in the world also means travelling. This gave me the idea to create a travel platform: KENSINGTON Travel. Our platform www.kensigton-travel.de now allows customers to compare some 1 million hotels around the globe – always with a best price guarantee – and provides them with access to all airlines and a lot more. From a technology point of view, we’re among the big players in travel portals. The whole company is somehow like a “journey”: We have goals, and sometimes the journey itself is the goal. And by the way, we’re celebrating our 20th anniversary as part of the KENSINGTON Polo Trophy this year.

And where’s your journey taking you? Are you planning to step down soon to travel more yourself?
(laughs) Well, I’m only 49. So I’m not really thinking about retirement just yet. We still have so many plans: we’ve only just launched our own investment fund, our family office is developing very well, and our worldwide expansion is going full steam ahead. A new franchisee is currently joining us each month. (laughs) And, not to forget, we’ve also founded our own publishing house and launched this really great lifestyle magazine. The trick is to delegate tasks and responsibility to younger people with the right attitude, and to focus on just a few things, namely the ones you’re particularly good at and you enjoy doing.